Emerging markets: Argentina currency crises and the case for cryptocurrencies. 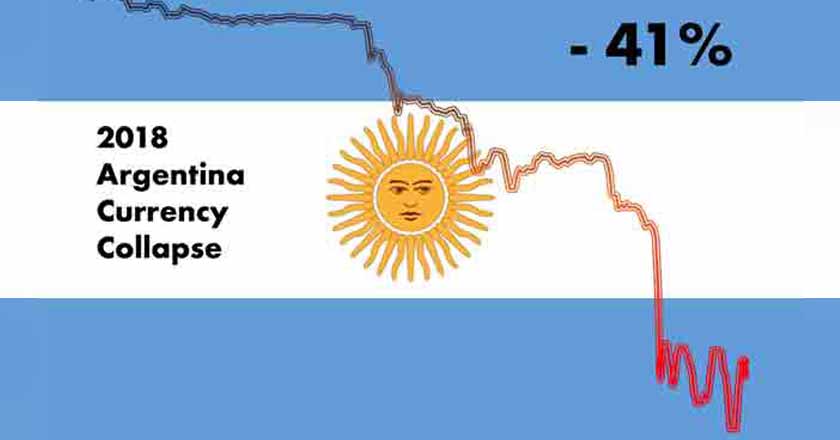 Since its launch in 2009, Bitcoin has attracted flurry of opinions from complete misunderstanding to awe, while being called all sorts of birdnames.
In reality, beyond the technical considerations of decentralized digital ledger transactions, cryptocurrencies are in fact currencies.
While not a majority of the use cases concentrates on disrupting payments in Emerging Nations, intrinsically, cryptocoins do depict fundamental similarities with Emerging Markets Foreign eXChange (EMFX) currencies.
This article is an attempt to focus first on laying out few examples of why and how current EM Currencies have been experiencing massive challenges in maintaining stability, second present few facts and mechanism about cryptocurrencies payments and finally how we believe cryptos and digital payments could dramatically help the Emerging World resolve issues on cross-border payments, currencies reserves and reduce volatility.

The Argentine Republic has been tainted by political crises for the longest we can remember. Particularly, in the recent quarter century and within the aftermaths of the Peronist autocracy, under ex-President Kirchner, vital relationships with international investors have severely eroded.

The first crisis resulted into the external debt default in 2002, following a massive devaluation of the Peso and nearly unresolvable debt exchanges with a pool of offshore investors, the so-called holdouts.
The second was a more traditional credit event on the back of legal imbroglio to wire USD payments on goverments obligations to international creditors. This resulted into foreign currency debt prices depreciation of nearly -60% in the span of 18 months which was settled in 2014.
Finally, the third and current crisis that has been unfolding in 2018. This economic downturn is specifically characterized by a crisis of confidence on the Republic’s ability to manage: (i) inflation, (ii) monetary policy and (iii) FX stability.

This finds its sources in a lingering discussion with the IMF in securing $57Bn financing, which resembles a chicken and egg situation whereby the blatant incapacity of the Central Bank to take effective measures to control the Argentine Peso downturn (ARS down -41% in 2018) prevents the deal with the IMF from going through. At the same time this conundrum inferred streams of negative sentiments within the international community along with the local players in trusting the currency and therefore a bearish environment for the onshore assets.

Without enumerating the never-ending list of currencies collapses in EM (Turkish lira, Venezuela Bolivar, Nigeria Naira, Zimbabwe Dollar...) and cases for hyperinflation, all those seem to point to an obvious need for power shift in the way those developing economies can access international funds. Namely the case for cryptocurrencies.

So first, why, what and how?

Why? seems fairly obvious at that point. Developed Markets, like the US or the EU, have an established track records of dictating the terms of debt restructuring of those Emerging Economies whenever they are on the brink of collapse. Thanks to the distributed architecture of transactions processing on the blockchain, cryptocurrencies present themselves as an ideal candidate to give access to funds outside of the traditional banking and financial system.

What? To the aforementioned, EM governments and citizens are in continuous needs for funds coming from the developed world via what we call cross-border payments, which for instance enable remittance payments.
Our current banking framework (so-called SWIFT) offers expensive payments processing (double digits % fees), constrains individuals to have bank accounts open in order to receive funds (currently nearly 2 billions people in the world are "unbanked", which means don’t have a bank account) and are operating in very slow, manual and error-prone processes, with numerous intermediaries.

Blockchain technology and crypto-transactions on the other side resolve those shortcomings by:
(a) offering virtually free transaction processing (or very marginal cost << 1%),
(b) offering peer-to-peer transactions (hence no intermediary required) and
(c) giving the ability to receive funds essentially instantly instead of days/weeks.

How? is definitely a trickier question and the tug of war within the current financial and technological landscape. With no pretentions of presenting an universal answer to EM currencies pressure and inflation issues, this last section proposes to go over few of the latest innovations and economic proposals that have come about in the recent years with the intent of addressing these issues.

This digital payment startup has spearheaded an initiative on the difficult economic situation in Venezuela, which CEO described as "a humanitarian crisis of the first order". The idea is to be able to find an alternative to storing value in fiat currencies like the EUR or USD which are traditionally stable, but difficult to access.
The core innovation was to enable the currency conversion to Dollar while protecting the identities of individuals. This was made possible by parterning with a Mexico-based peer-to-peer currency platform, named AirTM outside of the traditional bank network.
The experiment resulted in an outstanding 168,000 users adoption, which proved an independent decentralized payment infrastructure could overcome a corrupt and defunct goverment.

Bitcoin: a case for crypto-sovereignty.

An innovative initiative coming from Buenos Aires-born Santiago Siri, a blockchain technologist based in San Francisco, who intends to put forward his project to Argentina Central Bank head Luis Caputo. The idea is rather simple: propose to build up to 1% of the national FX reserves in Bitcoin. Various meaningful impacted are to be foreseen.

On the positive end:
• creating such reserves in a cryptocurrency will allow for a decentralized ledger to be established and affirm the government’s independence from G10 nations.
• it will enable kicking off blockchain infrastructure projects and send a strong signal to the international community Argentina is in as an early adopter.
• a virtuous side-effect for the cryptomarkets would be to affirm confidence in the digital money model, along with quantitatively supporting the coin by creating a de facto investment hold in the virtual currency.
• mining transactions is energy-intensive, leveraging off the country’s nuclear energy program could create some synergies.

On the sides of challenges and potential risks:
• the complexity of private keys management and related technology integration of a blockchain-based framework would be unprecedented, it’s very likely to be accompanied by ebbs and flows in the project progression - but that goes for all innovations.
• Bitcoin price volatility has been one of the major repellent for investors to be involved in. It will certainly require time for traditional financiers and economists to accept cryptocurrencies are reliable storage of value.

The cryptomarkets have drawn loads of attention in the international community but haven’t yet leveled up to the expectations. Big tech and Wall Street are playing catch-up but effort is spent on bringing blockchain to the corporate world, which contradicts the mere essence of a decentralized digital payment model. We strongly believe emerging nations should become a more prevailing area of focus. Either by helping the citizens in these developing countries or the governments themselves, the blockchain infrastructure and its cryptocurrencies will establish a new paradigm in global payments and reset the definition of sovereignty.